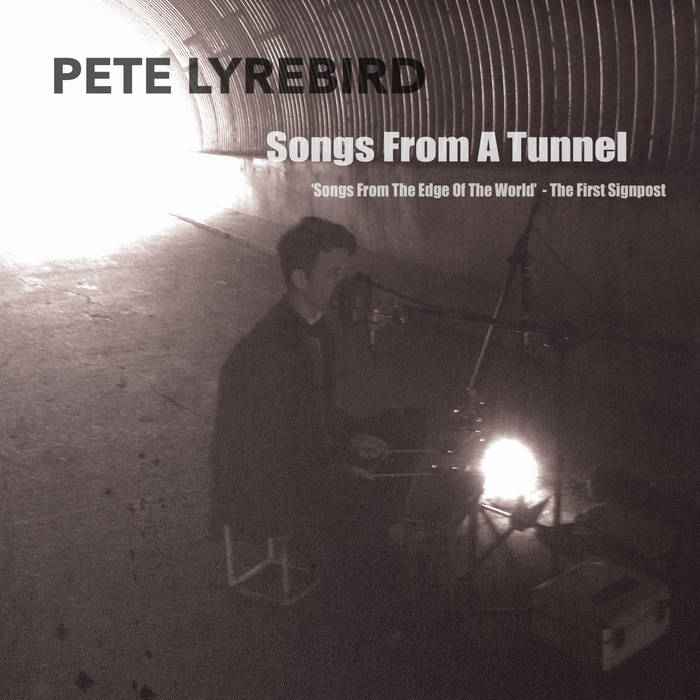 'Songs From A Tunnel' is the first single toward a debut album and features two vocal and percussion driven songs recorded in an underground tunnel in Tasmania, during March 2020 - just before Covid19 restrictions came into effect. Both tracks feature backing vocals by artist and singer-songwriter Röy Esther Ether. The songs were originally used for an ongoing live show - 'Songs From The Edge Of The World'.

‘Forty Two’ takes the lyrical form of a farewell letter to a lover, penned by a delinquent from the cold confines of a remote prison camp. Similarly, the Roy Orbison track, Blue Bayou (not available on Bandcamp due to licensing factors), is from the point of view of a downtrodden wage-slave, pining for the day when he can return to the place and people he loves. Given the atypical recording location, one may hear the odd bird-call and distant car passing. For audiophiles, the reverb in the tracks is almost entirely produced by the tunnel itself.

Dear Marjory,
How goes it for you?
The next time I see you I’ll be forty-two.

All here’s bin fine. Was assigned to the roads.
Where this one goes they never tell us…


I’ve never been so far away,
The ground here stays frozen for all of the seasons.

My cell here is small… cold, but it’s cosy,
And there’s a small window that brings in some light.

Sometimes at night I see the moon… and it’s nice to know it looks on you too.


The worst thing in here would have to be the food…
Somehow the pea soup makes dirt seem appealing.

The men here are fine. Some have become friends.
But some they don’t talk much, unless you offend…

And how is the crew?
Strange without me?
Tell ‘em to raise a full glass to the memories!


There’s no easy way to say this. I keep skirting round it.
But I’ll understand if you want to find another.

I know the heart grows cold all on it’s own…
To see off the winter it takes a warm jacket.


So do what you have to do - and never feel bad.
Maybe it was never meant to be the way we want it.

I can’t lie to you,
It’s hard to do this.
But knowing your free sets me free too.

My love Marjory, I leave to you.
May the future be bright and may it be true.

released December 16, 2020
Forty Two written and arranged by P.J Reid, Blue Bayou written by Roy Orbison, alternate arrangement by P.J Reid. All lead vocals and percussion by P.J Reid. Backing vocals by Röy Esther Ether and P.J Reid, recorded in a tunnel in Tasmania, edited by P.J Reid, mixed by Rohan Sforcina at Head Gap, mastered by Joe Carra at Crystal Mastering, produced by P.J Reid, with advising by Robbie Rowlands and Rohan Sforcina, photos by Richard Guy and Nick lupton, design by P.J Reid. Thanks to the Guys and Renato Vacirca. A Tar Pit Project.

Bandcamp Daily  your guide to the world of Bandcamp